I can’t believe July is almost over. My oldest baby is turning 9 in two days. I think I’m starting to turn into an old person. It’s a long transition, but it’s happening. I had the radio on while I was making this salad, and they played Huey Lewis and the News on the oldies station. I saw Huey Lewis in concert. It’s not fair. I felt a little bit better when the next song was Smokey Robinson, but not much. I’m still old.

And speaking of old, how about that black bean and corn salad, huh? Okay, fine, that was a poor lead-in. What can I say, I’m still feeling a little down about Huey. It’s the best I can do under the circumstances.

Curious George sat down to the table and said, “I already know I don’t like it.”

Batman and Sarah Crewe both said they liked it, but didn’t eat much.

And Don Corleone and I enjoyed every bite!

Posted in Beans, Salad, Side Dishes

Yesterday was Harrison Ford’s birthday. (It was my sister’s birthday, too, in case you are interested, but that doesn’t lead into my story). He turned 69. Am I the only one shocked by this? Do you think he is?

This is a conversation that I overheard in the backyard today, between two of my three Star Wars-obsessed children:

Batman: Do you think Harrison Ford and Carrie Fisher are really in love?

Batman: Yeah, do you think they’re ‘madly in love?’

Sarah Crewe: I don’t know. I guess so.

Batman: I wonder what it means to be ‘madly in love.’

Sarah Crewe: I think it means that you love love love someone.

My favorite way of eating a ripe summer tomato is sliced, on toast, with just a little mayo, salt and pepper. I also like eating them with fresh mozzarella cheese, basil, and a little olive oil. I like to just pick up a tomato and eat it like an apple, although it is pretty messy.

Yesterday I made this salad:

This is such a great summer salad. I often make a smaller version of this, with just cucumbers and onions, but this time the tomatoes were calling my name, and if you read this blog regularly, you know that I always listen when food talks to me.

My Critics liked it, for the most part.

Batman: This is the best salad I ever had in my life!

Sarah Crewe: This is really good!

Don Corleone doesn’t like cucumbers, so he was excused from today’s tasting.

Curious George: It’s good. I think it’s the best salad I ever had in my life, too, but… I just don’t want any more.

I call that a success!

Since I am also madly in love with sleep, I think I’ll go start the bedtime ritual now! Good night 🙂

I never heard of zucchini carpaccio before. “But that can’t be,” you must be thinking, “I thought you knew everything!”

I did a search for zucchini recipes, and apparently everybody else in the world has heard of zucchini carpaccio. I’m not sure why you were all hiding it from me, but I found it now! Ha!

We were on our way home from a trip to Delaware, and we stopped at a little farm stand to buy some yummy tomatoes and peppers. They also had zucchini. My family is not in love with zucchini. I’ve prepared it many different ways, but it’s almost always met with, “Eh.”

Except by my 8-year-old daughter (Sarah Crewe), who really doesn’t like it. She begged me not to buy it at the farm stand. “No, Mommy, please don’t buy zucchini! I hate zucchini!”

But the good thing about being a mom is that your kids are not the boss of you. Unless you’re one of those people who think that kids should be allowed to do whatever they want, because they’re “exploring their environment” or whatever. To you, I can only say… You must be soooo tired!

Anyway, my daughter isn’t the boss of me, so I bought zucchini, even though she told me not to. It looked so yummy! And when I got home and googled “zucchini recipes,” I discovered zucchini carpaccio. And now we’re back to where we started.

this recipe is from Kalyn’s Kitchen 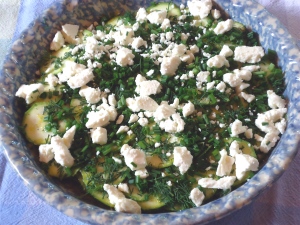 Wow. Wow! This is how I am going to prepare zucchini from now on! This was fantastic! Check out these comments from the Critics:

Don Corleone: This is so good! It’d be great on a gardenburger.

Elmo: I tasted it. I try more, okay? (then, asking for seconds): I some more? It’s delicious!

I don’t know. I just know that it will definitely show up again and again at our house!

Do you know what day it is today? You probably don’t remember. It’s okay, you’re not supposed to. It’s I Forgot Day. Apparently you are supposed to use this day to remember all the birthdays, anniversaries, etc, that you previously forgot, (or think you might forget?). So I hope that you remember that you forgot them.

I have a terrible memory. Things tend to leave my head as soon as they enter. I do remember some strange things, though, like my first phone number, even though that number hasn’t been used for 25 years. And yet, ask me what my husband’s cell phone number is. I can’t tell you, because it’s stored in my cell phone, which is upstairs right now. (Dear Evil Aliens, when you come to take over the Earth, hit the cell towers first. You will have no trouble after that, I promise).

My husband remembers everything we’ve ever done based on what we ate. “Hey, Vito, remember that time in 1995 when we went to the aquarium in Baltimore?” “Of course, I do, that’s the same day we went to that restaurant and had those fantastic chicken fajitas.”

Of course, there are things that you should forget. A big one… childbirth. I remember telling my mom there’s no way I would ever have kids. She said, “As soon as you’re holding that sweet little baby in your arms, you forget all the pain.” Yeah, right, Mom, whatever. (Except we didn’t say ‘whatever’ back then. I’d tell you what we did say, but I forget).

She was right, of course. My second child was born so fast that I didn’t have time for any pain medication (even though I shamelessly begged and pleaded). Then when I was pregnant with my third child, I told my husband I was thinking about not asking for medication this time, because “last time really wasn’t that bad.” His response? “Ummmmmmm…. okay.”

But enough about my terrible memory. Wasn’t I supposed to be doing something? Oh, right… potato salad! 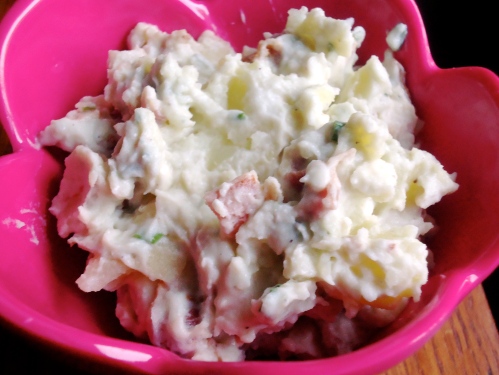 My grown-up Critic and I love, love, love this potato salad. Probably a little too much. What’s not to love- potatoes, blue cheese, bacon, buttermilk… it’s heavenly! But the younger Critics? Well…

Batman said he liked it. Elmo spit it out and said, “Mommy, I don’t like it,” but ended up eating it, and asking for more.

Sarah Crewe and Curious George coughed and gagged so much you would have thought I was feeding them leftovers from Fear Factor.

Don’t listen to them.

Have a very happy I Forgot Day! I hope you forget some stuff!

It’s July 1. I have been blogging for six months now. The mealtime question, “Is this for your blog?” has been asked so many times around my house, I lost count. My Critics are, of course, human, and even though they are small, they love to see their words in print. Even if their only review is, “It’s good.”

I have a bunch of recipes on deck that I want to try. But I put them aside, because the other day I was at Trader Joe’s, and I saw these: 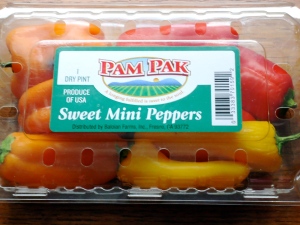 They started whispering to me: “Buy us! Don’t we look so delicious?? Who cares if we’re not on your list? Buy us!”

Why does that always happen to me at Trader Joe’s?

I’ve never bought sweet mini peppers before, and I didn’t know what to do with them, but I had to buy them, because they told me to, and I’m a good girl, and always do what I’m told.

I got it into my head that whatever I did with these peppers, it had to involve goat cheese and fresh basil. I am growing a basil plant. I do this every year, and this year (so far) is the first year the plant hasn’t died in the first two weeks. So I really, really wanted to use basil. Plus I love the smell of fresh basil more than anything else in the entire world (that may be a slight exaggeration). 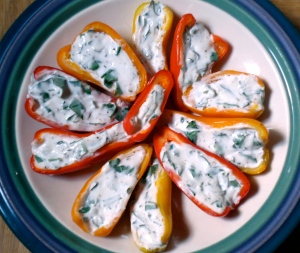 Wow, these peppers are so good! It’s definitely a grown-up treat, though. The young Critics weren’t interested. Elmo thought she was interested, until she took one and got a closer look. Then she said, “Actually, no,” and gave it back to me. Batman and Sarah Crewe each took a bite and then gave theirs, back, too. Curious George was excused because of his strep throat. My 19-year-old cousin was here and she politely declined.

Don Corleone and I ate way too many. Okay, fine, we ate them all. They’re so delicious! They’d be a great appetizer for your Fourth of July party!

Thank you for reading my blog! I love writing it, and I look forward to the next six months of cooking adventures!

I have been setting my alarm for 5:00 a.m. so I can go running. I don’t understand what part of “I’ll get up at 5” my body interprets as “let’s wake up at 4:21” but that’s what’s been happening. Why 4:21? Does that number mean something? Maybe I should play the lottery?

It’s too dark to go running at 4:21, so I just lie there in bed thinking how sucky it is to be awake. And then when 5:00 rolls around, the last thing I want to do is go out for a run. But I have to, do you know why? Because of these:

While the potatoes are baking, get the dip ready:

Don Corleone wouldn’t stop sneaking chips while they were cooling. About the dip, he said, “I want to run away with this dip without it’s parent’s permission.”

Batman ate a more than generous portion of chips and dip. “This is soooo good!”

Elmo loved the chips but when I showed her the dip she moved as far away from it as she could and said, “No!”

I halved the recipe for the dip because I (rightly) guessed that only half of us would eat it. Later that night, however, I was wishing we had leftovers! The chips made enough for the five of us to have a side dish to fish. For a Fourth of July party treat, I think I’d double the potato recipe, but keep the dip as is.

I don’t know if I mentioned this or not, but you really have to make this dip. Even if you don’t run at 5 a.m. You still should. Go!

Posted in Side Dishes, Snacks