I have been trying hard to cut back on the amount of red meat that my family eats. But when I suggested that we serve grilled chicken to our guests on Memorial Day, my husband practically had a… fine, I’ll say it, he had a cow. Cow, as in hamburger. Apparently one does not ring in the summer season with poultry.

So we’ll have our traditional hamburgers and hot dogs on Monday, and the healthy grilled chicken on Saturday.

Click here for a printable version of these recipes

I didn’t think of the tortilla chips until I had already gone to the store. But the salad still needed a little crunch. So I came up with:

They were not as crunchy as store-bought chips, but they worked. And because they were in Star Wars shapes, I heard no complaints 😉

And speaking of no complaints, there were none with this meal. Yippy-skippy!

Batman: I think this is delicious!

Sarah Crewe: Well, it’s okay. It really tastes like margarita. (as if she would know)

Elmo: It tastes like chicken. (awww… her first real critique)

Don Corleone said I’m putting too much pressure on him to come up with creative comments. But then he cracked himself up with the following:

“This reminds me of when I was in Pancho Villa’s army.”

“Maybe I shouldn’t have had that second beer.”

“This reminds me of a Mexican restaurant near my house growing up, except it’s good. And I don’t have diarrhea.”

I hope you all have a lovely Memorial Day weekend! Enjoy the unofficial start of summer, and don’t forget to pause to remember those who have died in our nation’s service.

The other day, my Critics asked one of their FAQ (see more of them on my FAQ page):

And then my alarm rang and I woke up. Boooo! Here’s how it really went down:

The other critics retreat in horror.

Me: It’s for my blog, so you have to taste it and I’ll write down what you think.

The Critics each take one teeny, mouse-size bite and declare their hatred of the crustaceous filling:

Sarah Crewe: I’d like the shrimp if it weren’t so… juicy.

Curious George: You can write down that I hate it. No, I really do, I hate it!

Thank goodness for Bubbye and Zaydee. We went to their house for dessert (and to meet their new little puppy, Louie) so my sweet little Critics did not have to go to bed with empty bellies.

Ah well, you win some, you lose LOTS.

I wanted to come up with my own recipe for shrimp tacos, but I found this recipe from Mrs. Happy Homemaker, and it looked so tasty (and easy!!) that I really wanted to try it. 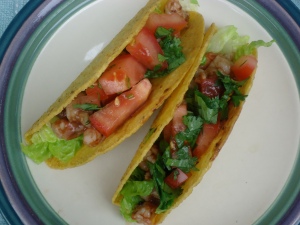 Apparently I do not know how to follow directions, because I didn’t realize the shrimp were supposed to be cooked first. So I marinated my uncooked shrimp in about half a jar of salsa, then drained it and cooked the shrimp in the remaining salsa in the skillet.

I, for one, thought this recipe was very yummy! My unfortunate Critics may be seeing this one again someday!

Would it sound as good if it were “Frank Sinatra’s Tuna Casserole?”

Fortunately for us, it’s sausage and peppers.

Frank Sinatra died this week (May 14) 13 years ago. I still remember it so clearly. I was getting ready for work when my mom called to tell me the news. ‘Oh man,’ I thought, ‘How am I going to break the news to Don Corleone?’

We had been married only nine months, and this was the first “big” news I had to break to him. He was (and is) a HUGE Sinatra fan. I knew I had to be gentle and sensitive. How would I, in my new role as a loving wife, handle this momentous occasion?

I hung up the phone, went into the bedroom where The Don was dressing for work, and blurt out, “Guess what! Frank Sinatra died!”

Don’t beat around the bush, that’s my motto.

This is the recipe that Frank Sinatra prepared when he appeared on Dinah Shore’s television show, and you can also find it in her cookbook:

I used half hot and half sweet Italian sausages, because I thought the hot would be too much for the kids. I served this with crusty garlic bread and spaghetti with marinara sauce. And salad, which nobody ate because we were all too stuffed from the pasta and sausage. 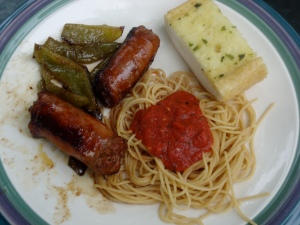 Wow. This was good. I mean really, really good. And I’m not just saying that because I think Frank will send some of his goons to haunt me from the grave. It really was fantastic.  My critics agreed:

Sarah Crewe: I really love the sausage. The peppers are bad.

Batman: The sausage and peppers are really good!

Elmo ate only pasta. But she didn’t have a nap today, so I think it’s unfair to take her opinion too seriously 😉

If you’re interested, click here to watch a video on youtube of The Chairman cooking his marinara sauce with Dinah Shore in 1970. It’s fun to watch!

I think I have Senioritis. I am not a senior anything, but it’s spring, and the weather has been gorgeous, and I don’t want to work. I just want to bang on the drums all day.

Or toot my oboe. Either one.

God bless the teachers of high school seniors in the spring. You might as well just phone it in. That’s what your students are doing.

My high school graduating class recently had its 20-year reunion. I didn’t go, because oh my gosh I totally wanted to but there was this really important thing I had to do that day and I’m so sorry but I just couldn’t get out of it which is a shame ’cause I’m sure it was loads of fun, too bad I had to miss it, so sad boo-hoo.

When the weather is as nice as it’s been this past week, I want to grill every night. This accomplishes three things: one- there is very little kitchen mess to clean up. Two- Don Corleone does the grilling (less work for me). And three- we get to eat a super yummy dinner (not to mention make our neighbors jealous with the delicious smell of meat cooking on an open fire).

Chicken on the grill

Is what you will not be having for dinner tonight, because you have to make this chicken. It is really, really simple, and really, really good! My critics all loved it, and that’s saying something!

Don Corleone: This chicken is an explosion of summer in my mouth. It reminds me of the summers I spent in China, if I ever went to China.

Batman: I love the chicken! 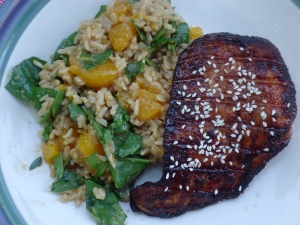 See the pretty salad next to the chicken? I was going to blog that recipe, too, but it wasn’t so great. In fact, next to each of the Critics’ comments above, just insert “…but do I have to eat the salad?”

Except for Don Corleone, who said, “The rice reminds me of Apocalypse Now.” I asked him what he meant by that and he said, “I don’t know. It just does.”

My husband informed me this morning that today, May the 4th, is Star Wars Day.

You knew that, too, right?

I got the idea for Star Wars oreos from justjennrecipes.com. Jenn is my go-to resource for all things Geek and Food. I am so enamored of her creativity! Since I am married to a Geek, and am apparently raising a whole new generation of Geeks, and since I love to cook, I visit her site frequently (read: daily).

Nice try, Obi Wan. These are precisely the cookies I’m looking for!

The last time I made these, I added green food coloring to half the batter for Yoda, and cocoa powder to half the batter for Darth Vader. I didn’t take a picture, because I had no idea Star Wars Day would be here so soon! It just creeps up on you, doesn’t it??? This time I only made Yoda and Boba Fett, because making one big green batch was, quite frankly, all the excitement I could take for one day.

Goodness, with the Royal Wedding, the bin Laden news, and Star Wars Day… this is turning out to be quite a week! I’m going to need a vacation after all this!

Speaking of vacations, my six-year-old wanted to know if cereal for grown-ups has alcohol in it. Mmmmm… Martini-O’s! That might be just what the doctor ordered!

May the 4th be with You!

(that’s the Star Wars Day slogan. Seriously. You can’t make this stuff up!)

Two major events that will go down in history happened in the last two days. One, Osama bin Laden was killed by US Navy Seals. And two, I made a dinner that every member of my family enjoyed.

I do realize that one is significantly more important than the other (but I won’t say which one).

Whenever the leader of a major terrorist organization is captured and killed by Navy Seals, you should make teriyaki pork chops in your slow cooker. That’s just good sense.

Do you believe every single Critic loved these chops?

Sarah Crewe picked up her chop with her hands and ate it like a barbarian. She was afraid if she cut it on her plate, some of it might touch her applesauce. But, she said: I like it!

Batman: This is really good!

The Navy Seals rock! They know how to whack a bad guy when they find one. Here are some movies where the villain also gets his/her comeuppance:

The Wizard of Oz:

Raiders of the Lost Ark:

Mr. Potter getting his butt kicked

Charles Bronson, in any movie:

This is so not my area of expertise, so VC had to help me!

And now I leave you with this last thought:

“The most important thing is for us to find Osama bin Laden. It is our number one priority and we will not rest until we find him.” -George W. Bush